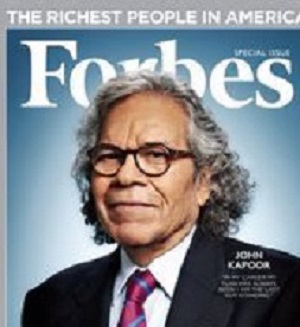 A 74-year-old US pharmaceutical tycoon who found an aggressive way to sell vast numbers of opioid painkiller by allegedly bribing doctors with speakers’ fees, dinners, entertainment, cash, has been arrested, reports Bloomberg.

More than a decade after opioid painkillers first exploded across the US, John Kapoor found an aggressive way to sell even more, according to prosecutors: He began bribing doctors to prescribe them with speakers’ fees, dinners, entertainment, cash. Bloomberg reports that federal charges recently unsealed claim Kapoor’s striving company, Insys Therapeutics Inc, employed all of that and more to spur prescriptions of a highly addictive fentanyl-based drug intended only for cancer patients.

The report says as President Donald Trump declared at a White House event that opioid abuse represents a public-health emergency, authorities arrested Kapoor in Arizona and painted a stark portrait of how Insys allegedly worked hand in glove with doctors to expand the market for the powerful agents. “Selling a highly addictive opioid-cancer pain drug to patients who did not have cancer makes them no better than street-level drug dealers,” Harold Shaw, the top FBI agent in Boston, said of Kapoor and other Insys executives charged earlier in the case.

The report says the story of the 74-year-old billionaire and the company he founded traces the arc of a crisis that claims 175 lives each day. What began with the over-prescription of painkillers in the late 1990s soon became a race by manufacturers to dispense more and more pills. Charged with racketeering conspiracy and other felonies, Kapoor became the highest-ranking pharma executive to be accused of an opioid-related crime, and his arrest may portend charges against companies far larger than Insys, which has a modest $417m market capitalisation.

In Connecticut, the report says prosecutors have begun a criminal probe of Purdue Pharmaceutical Inc’s marketing of OxyContin. Scores of states, cities and counties have sued companies including Purdue, Endo International Plc, and Johnson & Johnson’s Janssen Pharmaceuticals, alleging they triggered the opioid epidemic by minimising the addiction and overdose risks of painkillers such as Percocet.

But, the report says, so far, no recent case has been so sweeping as the one against the executives including Kapoor, who made his initial court appearance in Phoenix. A US magistrate judge set bail at $1m and ordered Kapoor to surrender his passport and submit to electronic monitoring. His lawyer, Brian Kelly, said Kapoor posted bail after the hearing.

The report says a Rhode Island doctor has now admitted accepting kickbacks from Insys in exchange for writing prescriptions. Earlier this year, two doctors were sentenced to more than 20 years behind bars for accepting bribes from companies including Insys to sell fentanyl-based medications. The Kapoor indictment pinpoints the start of the alleged scheme.

It was early 2012, and Insys’s new oral spray of the opioid fentanyl wasn’t selling well. Because it was so addictive, the pain-relief drug was subject to a tightly controlled distribution system, and regulators demanded to be notified about suspicious orders by manufacturers, wholesalers and pharmacies. And the drug wasn’t cheap, so insurers set up barriers for patients seeking it.

The report says that was when Kapoor and others at Insys went to extremes to dramatically boost sales of the painkiller, prosecutors said. Doling out speaker fees, marketing payments and food and entertainment perks, they allegedly began bribing doctors to prescribe the drug, and then tricked insurers into paying for it.

One Insys sales executive told subordinates that it didn’t matter whether doctors were entertaining, according to the indictment: “They do not need to be good speakers, they need to write a lot of” Subsys prescriptions, the official said, referring to the brand name of the painkiller.

Over a two-year period starting in 2013, Chandler, Arizona-based Insys set aside more than $12.2m for doctors’ speaking fees, prosecutors said. One doctor received as much as $229,640 in speaker fees for appearing at what amounted to “sham events that were mere social gatherings also attended by friends and office staff,” according to the indictment.

The report says the company encouraged doctors to write more prescriptions by hiring their friends and family members to serve as “business liaisons’’ and “business-relation managers,’’ prosecutors said. These support-staff employees worked in the doctors’ offices but were paid by Insys in what the indictment called bribes and kickbacks. Insys even made a video featuring a sales rep dressed as a giant fentanyl spray bottle, rapping and dancing to a song that pushed the idea of getting doctors to prescribe higher doses, prosecutors said.

Others previously charged include Michael Babich, Insys’s former CEO, Alec Burlakoff, the ex-vice president of sales, and Richard Simon, once the company’s national sales director. They all deny wrongdoing. The report says Joe McGrath, an Insys spokesperson, declined to comment on Kapoor’s indictment in Boston federal court. The company, which wasn’t charged, has reportedly been in settlement talks with the US Justice Department to resolve a probe into its Subsys marketing.

The first person in his family to attend college, Kapoor rose from modest means in India to become a wealthy health-care entrepreneur, after earning a doctorate in medicinal chemistry at the University of Buffalo in 1972, the report says according to a work-history the school posted. He was a plant manager at Invenex Laboratories in New York and later became CEO of LyphoMed, a hospital-products company. He sold LyphoMed to Fujisawa Pharmaceuticals and formed a venture capital firm that invested in health-care companies.

In 2010, he merged privately held Insys with NeoPharm Inc to get access to technology to develop pain drugs for cancer patients. Even though he has stepped down as Insys’s chair and CEO, he still holds more than 60% of its stock.

Kapoor and Babich are also accused of misleading insurers about patients’ diagnoses and the types of pain they suffered that were covered by the Subsys prescriptions tied to the payment scheme, prosecutors are quoted in the report as saying. The company’s agents allegedly told insurers that patients were receiving Subsys for “breakthrough pain” to secure coverage. They also misled insurers about what other pain drugs patients had tried before being proscribed Subsys, according to the indictment.

The report says some lower-level Insys employees have pleaded guilty and are cooperating with prosecutors, according to court papers. Elizabeth Gurrieri, a former manager who oversaw insurance reimbursements, pleaded guilty to one count of conspiring to commit wire fraud in June.

Kapoor has resigned as chair of drugmaker Akorn Inc, just days after his arrest, says a Reuters report. Akorn, in a regulatory filing, said that Kapoor had resigned as chair and a director of the company, and said director Alan Weinstein was named to replace him as chair.

The report said Kapoor’s lawyer did not immediately respond to a request for comment. Last week, he said that Kapoor is innocent and will fight the charges. Kapoor had stepped down as chief executive of Insys in January.

The 'golden hour': Delays in trauma treatment and patient outcomes

Africa's enigma: Why has the pandemic been less severe here?

2020 Medicine Nobel Prize to be shared by three scientists

Munshi: Reflecting on a tragedy

Only 28% of emergency PPE suppliers registered with Sahpra

Self-sampling for STIs in rectum and throat just as accurate

Classified Advertising
Every week your advertisement will reach more than 48,000 South African health professionals, including more than 37,000 medical doctors.

MedicalBrief is Africa’s authoritative weekly digest of medical matters, both on the continent and around the world.

It brings you a succinct summary of the latest developments, both in news and research, with links to the original material.
Medical Brief 2016.
Development by Howl Media